Jean Shafiroff Goes Global with her Philanthropy in Style 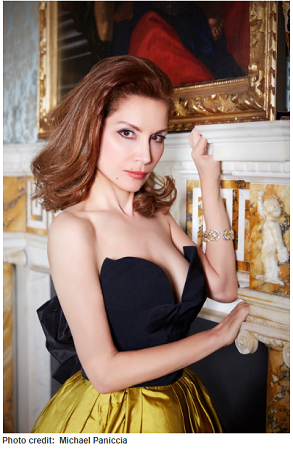 Fashion icon, philanthropist and author Jean Shafiroff continues her drive to motivate charitable giving among more people across the world. A commanding presence on New York’s lively charity scene, she organizes approximately eight fundraisers a year, and her A-list galas, lunches and cocktail parties are legendary. Jean regularly hosts politicos and luminaries from the arts and industry in the elegant Park Avenue apartment and spacious Hampton’s home she shares with her financier husband, Martin and their two daughters.

Jean was named “The First Lady of Philanthropy” by Hola magazine, reflecting her effective skills and tireless work for good causes. She has been honored by countless charities, including the Stony Brook Southampton Hospital, American Heart Association, American Cancer Society, NYC Mission Society, Jewish Board, Southampton Animal Shelter Foundation and Surgeons of Hope, among many others.

Jean attributes her interest in philanthropy to her family, life experiences and her education.  She attended 12 years of Catholic school where the nuns taught her the importance of giving back. A  graduate in Physical Therapy from the College of Physicians and Surgeons at Columbia University, Jean worked at St Luke’s Hospital in New York City, where exposure to human suffering sparked her desire to do charitable work. She then went back to college to earn an MBA in Finance from Columbia University before working on Wall Street in public finance and private partnerships. Her combination of business skills, empathy, powerful connections and social visibility are of unique benefit to the organizations she supports. Jean’s Board appointment to the Southampton Hospital Association in July 2019 means she now sits on the board of  eight charities. Each year she chairs or co-chairs galas for approximately eight charities, including an increasingly international focus.

Recently, Jean hosted several large cocktail parties in her home for different charities, including one for 125 people for Surgeons of Hope, an organization that sends heart surgeons to developing nations to perform life-saving operations on young children. She will chair their gala in New York in October.  Jean is on the board of the French Heritage Society, and has co-chaired their New York gala many times. She supports the American Heart Association, which runs international lifesaving programs help reduce cardiovascular disease and stroke. She has chaired their gala in the Hamptons a number of times.

In February, Jean travelled to meet Pope Francis in Rome. She has met Prince Harry in support of the charity, Walking with the Wounded. She is a supporter and friend to Cherie Blair’s Women’s Foundation, helping increase the potential of women entrepreneurs around the world. Jean’s extensive travels have reinforced her belief that much more philanthropic work is needed.

“In the United States we have tens of thousands of charities and many people are involved, but our model doesn’t exist in all countries,” says Jean. “I have decided to become more involved with international charities because there is a great need globally for philanthropic help.”

Jean authored a practical guide to charitable giving in her book Successful Philanthropy: How to Make a Life by What You Give. She demonstrates the importance of  giving time, knowledge and resources  and offers practical advice on how best to support your chosen causes. Jean’s book includes an introduction by the great philanthropist Michael Bloomberg’s daughter,  Georgina Bloomberg, and  highlights the myriad ways people can help to build lasting change, and the personal fulfilment this can bring.

As part of this drive to engage more people in charitable causes, Jean has often appeared   on TV to talk about her book and philanthropy. With her rescue dog Rosita, animal welfare is another cause close to Jean’s heart. She’s a strong advocate of “adopt, don’t shop” when it comes to choosing a pet, and supports the work of animal charities in the US and abroad. She took time out on a recent visit to Panama to visit a homeless animal shelter and highlight the work they do to her hundreds of thousands of Instagram followers. She is treasurer and donates to Global Strays, a charity founded by her daughter to fund animal rescue groups across Nicaragua, the Dominican Republic and Costa Rica.

Featured on some of New York’s best dressed lists and then on LookOnLine’s International Best Dressed list (2018) along with Ana Wintour and Meghan Markle, Jean loves fashion, and never misses an opportunity to light up a charity gala in an exquisite couture dress by one of her favorite designers. Some of her favorite designers include Oscar de la Renta, Carolina Herrera, Zang Toi, Zac Posen, B Michael, Mary McFadden and Victor de Souza. “When we dress well,  we raise the level of an event up,” says Jean.

She sits on the board of the Couture Council, which fund the Museum at the Fashion Institute of Technology. The stylish philanthropist regards fashion as art, and is building an important collection of gowns, which she plans to donate to a museum in the future. But for the moment, Jean is enjoying the experience of wearing them.